By: Sarah Pinborough
Published: 2017
Pages: 318
Quote: “Sharing a secret always feels great in the moment, but then becomes a burden in itself. That gnawing in the pit of your stomach that something has been set free and you can’t call it back and now someone else has that power over your future.”

Louise is a single mom, a secretary, stuck in a modern-day rut. On a rare night out, she meets a man in a bar and sparks fly. Though he leaves after they kiss, she’s thrilled she finally connected with someone.

When Louise arrives at work on Monday, she meets her new boss, David. The man from the bar. The very married man from the bar…who says the kiss was a terrible mistake, but who still can’t keep his eyes off Louise.

And then Louise bumps into Adele, who’s new to town and in need of a friend. But she also just happens to be married to David. And if you think you know where this story is going, think again, because Behind Her Eyes is like no other book you’ve read before.

David and Adele look like the picture-perfect husband and wife. But then why is David so controlling? And why is Adele so scared of him?

As Louise is drawn into David and Adele’s orbit, she uncovers more puzzling questions than answers. The only thing that is crystal clear is that something in this marriage is very, very wrong. But Louise can’t guess how wrong—and how far a person might go to protect their marriage’s secrets.

I watched the Netflix mini series a couple of months ago and enjoyed it, so I decided to check out the book. I was pleasantly surprised by how true to the book the series ended up being.

Louise is a single mom who works part time and is slightly dissatisfied with her mundane life. Little does she know, her life won’t be mundane for long. On a rare night out, her friend doesn’t show up. Instead of heading back to her apartment, Louise decides to take advantage of having a babysitter and enjoy some time alone. But then she meets a man. It’s not like her to flirt and even kiss without even knowing his name, but that’s what she does.

A few days later she finds out her new boss is none other than the mystery man. She’s embarrassed, but this is something she will laugh about later, right? But then she meets his wife and before she knows it, she’s enmeshed in more secrets than she can handle.

This book is a little hard to classify. At first glance it seems like a phychological thriller, but it’s more than just that, so keep an open mind while reading. It’s very original and creative. Louise is an easy character to understand and sympathize with, although at times I wanted to slap some sense into her.

After you read the book check out the show! If you’ve read or watched Behind Her Eyes, what did you think?

The Turn of the Key

When she stumbles across the ad, she’s looking for something else completely. But it seems like too good an opportunity to miss—a live-in nannying post, with a staggeringly generous salary. And when Rowan Caine arrives at Heatherbrae House, she is smitten—by the luxurious “smart” home fitted out with all modern conveniences, by the beautiful Scottish Highlands, and by this picture-perfect family.

What she doesn’t know is that she’s stepping into a nightmare—one that will end with a child dead and herself in prison awaiting trial for murder.

Writing to her lawyer from prison, she struggles to explain the unravelling events that led to her incarceration. It wasn’t just the constant surveillance from the cameras installed around the house, or the malfunctioning technology that woke the household with booming music, or turned the lights off at the worst possible time. It wasn’t just the girls, who turned out to be a far cry from the immaculately behaved model children she met at her interview. It wasn’t even the way she was left alone for weeks at a time, with no adults around apart from the enigmatic handyman, Jack Grant.

She knows she’s made mistakes. She admits that she lied to obtain the post, and that her behavior toward the children wasn’t always ideal. She’s not innocent, by any means. But, she maintains, she’s not guilty—at least not of murder. Which means someone else is.

Review:  This is my favorite Ruth Ware book I’ve read so far.  I enjoyed her others just fine: The Woman in Cabin 10, In a Dark, Dark Wood, The Death of Mrs. Westaway, and The Lying Game.  However, I enjoyed The Turn of the Key the most.  I haven’t read the classic The Turn of the Screw yet, but I gather this is either a retelling or has a similar storyline.

In her letter to an attorney, Rowan states she is guilty…but not of the worst crime she’s been accused of committing.  She goes on to tell the story of how she was hired as a nanny at a large modern estate in the remote countryside of England.  She’s told right off the bat that the house may be haunted, at least that’s what overly superstitious people believe.  Rowan isn’t superstitious so she doesn’t give that claim a second thought.  Not, that is, until strange things begin to occur in the house.

I definitely enjoyed this Gothic suspense and was surprised at the plot twists.  I recommend this to those who enjoy the Gothic and/or physicological thriller genres.

Why I gave this book 4/5 stars:  Interesting and suspenseful story, was able to relate to the character more than some of Ware’s other characters. 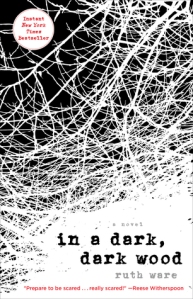 In a Dark, Dark Wood

In a dark, dark wood

Nora hasn’t seen Clare for ten years. Not since Nora walked out of school one day and never went back.

There was a dark, dark house

Until, out of the blue, an invitation to Clare’s hen do arrives. Is this a chance for Nora to finally put her past behind her?

But something goes wrong. Very wrong.

And in the dark, dark room….

Some things can’t stay secret for ever.

Review:  Now I’ve read all of the books Ruth Ware has published.  Her books are interesting and easy reads.  This book is on my R.I.P. Challenge list.  It wasn’t as creepy/suspenseful as I thought it would be based on the description, but it held my interest and was a fast read.

Nora receives an unexpected invitation to her ex-bestfriend’s bachelorette party (hen do in the U.K.).  She hasn’t seen Clare in 10 years since they were about 16, but she consults with a mutual friend who was also invited.  They decide they’ll both go even though neither really wants to attend.

Almost immediately upon arriving at the remote country house in the woods, things start to go downhill.  Nora wants to leave before the weekend has truly begun, but she’s prevented from doing so.  Trapped in the house with a mixed group of strangers and estranged former friends, she slowly realizes not everything that’s happening is a coincidence.

I wasn’t too attached to any of the characters.  I couldn’t really relate to many of Nora’s decisions.  I felt sorry that she was so tramatized by her past and concerned about impressing Clare both in the past and present.

This wasn’t the most amazing book I’ve ever read, but it was fun and easy.  I wouldn’t have minded a little more creepiness, but there was still some suspense and mystery.  I recommend it to those who enjoy the suspense/thriller genre.

Why I gave this book 4/5 stars:  Fun and well-paced mystery, so-so characters and plot.

My name is Amber Reynolds. There are three things you should know about me:
1. I’m in a coma.
2. My husband doesn’t love me anymore.
3. Sometimes I lie.

Amber wakes up in a hospital. She can’t move. She can’t speak. She can’t open her eyes. She can hear everyone around her, but they have no idea. Amber doesn’t remember what happened, but she has a suspicion her husband had something to do with it. Alternating between her paralyzed present, the week before her accident, and a series of childhood diaries from twenty years ago, this brilliant psychological thriller asks: Is something really a lie if you believe it’s the truth?

My review:  Someone on the Silent Book Club I’m a part of on Facebook mentioned how the newest trend in titles now is the word “lie” or “lying.”  We’ve got The Lying Game, One of Us is Lying, Let Me Lie, Lie to Me, etc.  And here is Sometimes I Lie.  For a good part of the book I was a little annoyed by the title.  I felt like there was probably a better title the author could have used.  However, towards the end the title became a lot more appropriate.

I usually don’t read any Goodreads reviews of a book before or even after reading.  However, after you finish this book you will want to talk to someone about it, you will want to read what others have to say.  So I went onto Goodreads.  A lot of people were complaining that it was confusing and they missed the plot twist and had no clue what was going on at the end of the book.  I didn’t feel that way because I followed along pretty well, but I can see why it’s confusing to some people.  This is one of the few books I want to read again just after reading it for the first time.  I probably won’t do that, but it would be interesting to read it again after knowing the plot twists.  Yes, twists plural.  Also, it’s really hard for me to type the word twists for some reason. 😛

The story is about Amber Reynolds, who begins the book with the revelation that she’s in a coma.  She can’t remember what happened in the days before she regained consciousness, but while she is unable to move or communicate in any way, she has plenty of time to try to remember.  The book alternates between NOW, when Amber is in a coma, THEN, which is the days leading up to her coma, and BEFORE, when she was a child.

Some of the reviews I read accused the author of adding too many details to throw off the reader, but I wonder if there was more purpose than we think to many of the descriptions.  I wouldn’t be surprised if the author writes a sequel that explains the ending and other things that happened throughout the novel.